Judd Hoos assemble! That was definitely the case this weekend in Gillette, WY. On this Valentines Day 2014, due to different company and schedules, the Judd Hoos boys traveled separately. Hornbot (Chris), with his better half riding together. Shane Dawg and Eight Mile Andy in the band cruiser, and D Money (Devin) and I in our car. Considering it was a short journey to Gillette from Rapid, we all didn’t leave town until around 1.

Once in town, it felt good for all of us to get into the lobby and see each other after the long week. Checked in and headed to Jake’s for setup and sound check. I really liked the venue. A huge stage in a really big open room and even a little green room off to the side of the stage. I can dig it! Eight Mile Andy and I decided to have a race to see who could change strings the fastest. Little did I know, Andy had an advantage due to a little thing called locking tuners. For all you non-guitar players out there, that means you don’t have to wind the strings as much… Ya, not so fair is it!? Needless to say, Andy won. Had a great sound check. The PA was blasting and sounding powerful. Between the crew and all of the band we were getting into a good routine of how to set up, especially with so much space.

It was getting dark by the time we got back to the hotel. We had enough time to get in our pre show rituals (ironing, drinking, doing our hair) before we had to get ready for showtime. Judd Hoos was looking sharp and ready to rock. Piling back into the band cruiser we stocked up at the liquor store with necessities for after the show. It was a well known fact that Chancey Williams and the Younger Brothers Band was in town playing at the rodeo and were coming to party with us after their gig. 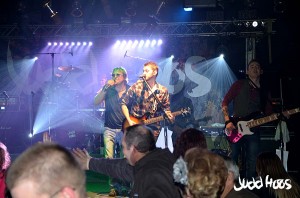 Judd Hoos took the stage! Lots of energy and we were all fresh from the week. The crowd was really friendly and there were lots of Hoos fans out there, which was awesome. We all played really well throughout the whole night! I felt really good about our sound. The second set was hoppin and the third set had people packed on the dance floor. So much fun to have such a big stage to run around on. The first night at Jake’s was awesome. The band was tight and the audience loved it. Chancey Williams and his crew showed up towards the end of the third set, and we rocked it out for him. There is this feeling that you can’t describe to someone who doesn’t play in bands. This feeling of when you come off stage and realize you don’t have to tear down that night because you are playing the next night in the same place. Sweet victory! So we got ready to go and the cruiser was on the way back to the hotel. 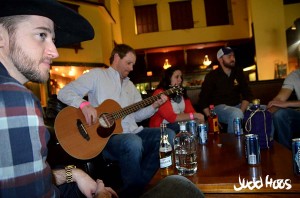 This was probably the highlight of the weekend. Judd Hoos and Chancey Williams plus crew came into the hotel lobby and set up couches around a table and had an arsenal of beer cans. We all had guitars, a melodica, a cajon (drum box), and an acoustic bass. Add a bunch of musicians to those things and we had ourselves a jam session! A jam that lasted into the early morning hours. It was fun to see as the time went on people slipping off to their beds. The jam ended with Chancey and Travis jumping into the hotel pool and realizing it was almost 6 in the morning. We all couldn’t believe that we were not asked to stop or leave. Thank you Clarion Hotel and a shout out to Tanya for letting us make some music and good times together. 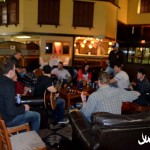 We slept in and all got up and had worked up quite the appetite. A few of us Hoos boys and the Chancey guys met up for some lunch at the Skyline Grille. Great food! And thanks to Bob the beer man for lunch! There is such thing as a free lunch. Since we weren’t traveling today and had all of our gear set up we had planned an afternoon rehearsal to put together a couple new songs.

At the hotel we pre-rehearsed on acoustics and got some structure down. We also had some time to try out a new Judd Hoos original in the works. Folks start getting excited because this new Judd Hoos sound is going to blow your minds and keep you begging for more. Everyone feels so excited and has lots of energy toward writing, recording, and playing some originals live! We moved rehearsal to the bar and got the new tunes polished and sounding great. You could tell everyone was a little burned out from the late night in the lobby, but it was such a productive afternoon. Judd Hoos also took the opportunity to record a live video of us playing a new cover we are doing in the show in the green room. Stay tuned for it debuting on some JH social media very soon!

We all agreed we needed to get a little rest before the show, so we went back to the hotel and got as much as rest as we could. My parents came up from Denver and Dean Kinney was also coming to check out the show tonight. Lots of important people on the guest list for the night! 9 30 came so fast and it was time to take the stage already. The first set went smooth. The crowd enjoyed most of it from their seats until people couldn’t help themselves anymore and flooded the dance floor. It was a Judd Hoos show before we knew it. The second set was incredible. Followed by probably the best third set we have had this year! The two new songs we put together that day went over really well and the amount of energy between us and the crowd was electrifying! We had the bar lights come on before the encore, and they turned them off so we could keep rocking out for one more song. Everyone was so impressed with the new Judd Hoos. Nothing but smiles and laughter back in the green room after the show. We all had such a good time.

The weekend in Gillette was such a success! It was full of energy, drinking, late nights, productive musical stuff, and making new Judd Hoos fans and friends. Thank you to all who came out to Jake’s and helped us have such a great weekend. Thanks to Chancey Williams and the Younger Brothers Band for coming out both nights and hanging with us. So good to see all of you! We will be going to Madison and Watertown, SD this next weekend. So you all know who you are, when I say, get ready to party with us! Stay tuned for more on the road with Judd Hoos and we will see all of you really soon.