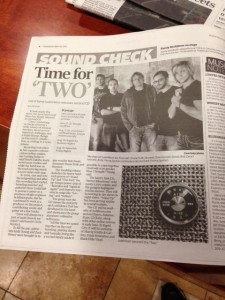 Here’s an article about us in the May 30th Black Hills 2 Go by the Rapid City Journal. Click Here.

“Two,” containing 14 tracks covering a wide variety of musical territory, faced several logistical challenges and a major lineup change on the road to completion, according to a news release.

Recording took place in two separate commercial recording studios, one hunting lodge in rural South Dakota, many motel room studios and while the band was on the road covering nearly 40,000 miles each year.