Judd Hoos has a few reputations that we follow. Such as we are a very good rock band, we put on one hell of a show, and we always play a show no matter what. This last weekend we were put to the test and battled the weather so we could entertain the good people of South Dakota and Nebraska. It was a routine Friday morning though. We all met at the Flying J and loaded up to get on the road as quick as we could. Andy was very excited to get the satelite radio on the ESPN station so he could listen to the World Cup. As we listened to the game we were trying to find a tent company who would come out and set one up for Saturday nights show. There was 100 percent chance of rain and we were really worried about how Judd Hoos was going to pull of this show. It was pretty hard to find any one with an available tent especially since it was so last minute. There was also a chance we were going to get a storm hit us on Friday too. The ride to Ethan SD was a little rocky as the ice man swayed in the wind like a pirate ship on the sea from the strong winds.

The crew had arrived a little late so we headed straight to the hotel to relax for a little while before heading over to sound check. It was a beautiful afternoon and the wind was blocked by the buildings surrounding the street. Judd Hoos ended up having a little rehearsal and did some very productive work on some new originals. Since we did that though we had to rush back to the hotel and get ready fast. Someone noticed that Bob had brought a cooler for water and beer. But the real surprise wasn’t what was inside but what was written on the top. Bob Z had tried to write Judd Hoos in bubble letters and ended up with a Judd Hoss! Classic. Back at the stage, we were all on our phones looking at the radar. There was a big storm that looked like it was going to hit us. So we got up and started our first set as fast as we could. The crowd leaked down the street to get closer to the stage and the people were really into it. We cut the first set short though. The wind had picked up and the Judd Hoos banner had turned into a sail and could very well have pulled down the whole light rig. The crew got some more bungees on it as we kept watching the storm coming up towards us on the radar. We grabbed some tarps and put them behind everything just in case we would have to throw them on during the set. We hit the stage again with a powerful second set. The crowd had really grown and people were up in front of the stage ready to rock. It was an all ages show and I was surprised at how many high school kids were there. The more contemporary covers went over really well. And they loved our originals too. It seemed like the second set was never going to end as we all came to the realization that we were not going to be rained on. So we finally took a break and finished up the night with a great third set. Ethan SD really liked us and we had a blast playing for you. 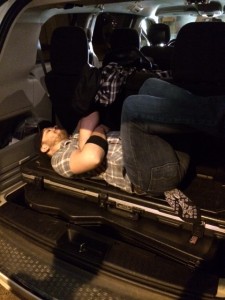 Tear down wasn’t too bad. We could see this crazy lightning show out in the distance as we loaded up the last of our equipment. We were putting the guitars in the van and Andy somehow got loaded in the trunk as well. We got him out before we left, don’t worry. Judd Hoos headed back to the hotel and the band crew and friends all enjoyed some refreshments and relaxed until one by one we all drifted off to our own beds.

Saturday morning was very pretty out. I got up early and said goodbye to the crew and played acoustic guitar outside the hotel until the rest of the guys were ready to go. We all got our coffee fix and were on our way to Nebraska. Little did we know how long of a day this was going to be. The drive was pretty going through the rolling green hills and farm lands of Nebraska. We arrived in Humphrey at a decent time and met with the crew and Bob Z to try and figure out a game plan. After a lot of ideas passing around we finally decided to set up drums and amps on one trailer and then tarp it all in case of rain. And also if it rained or rather WHEN it rained we could go straight into the fireman’s hall down the street. Set up was a breeze without lights and PA. They were having a car show in the street with beer and BBQ. It was fun seeing some really nice old cars and you would never have guessed it was going to rain like crazy that night. 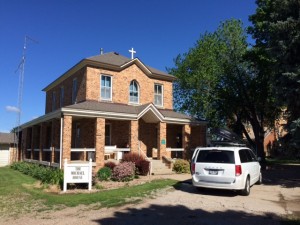 We left to go find the place where we were staying in Tarnov, a even smaller town down the road from Humphrey. The band was staying at an old church rectory building behind a huge chapel. The grounds were really pretty and house was old but cozy and had tons of bedrooms that they keep nice for people to stay in. It was such a weird change from checkin into a hotel. Devin was convinced it was haunted and was trying to scare everyone. We were all just hanging out in our bedrooms when Shane Funk came running up and saying we had to get going because the storm was coming. We all grabbed bags and clothes and right before we all got loaded up Shane decided we were just going to wait and see what happens. All of us ended up on the back porch after we all showered and watched the crazy storm come in. The lighting was so wild and the clouds were super dark. Every few minutes we would walk upstairs to get good enough service to watch the radar. There was this long line of storms headed straight for us. And when it finally hit the house you couldn’t see 10 feet away from it. There could have been a tornado right next to us and we would have never known. Judd Hoos ran into the van and headed straight to Humphrey to check on our gear and see what the plan was. Everything was tarped well and we got a break from the rain at 9. 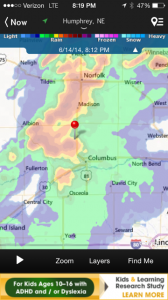 The game plan was to get as much help as we could and get trucks and fork lifts to move the trailers down into the fire hall and get set up as fast as we could. The process was amazing. We rode in on the trailers with our gear like we were in a parade. Bob Z was in his element as he commanded how he wanted to the stage to be set. Unfortunately the trailer got put in backwards and the drums and amps were facing the wrong way. The fire men and everyone else were working so hard to get the trailers together and then the PA loaded out of our trailer and set up. The rest of the crew were going crazy on the light rig trying to get it set up. It was organized chaos. We all flipped around the drum riser with the drums on them still. And since the amps were on opposite sides Andy Devin and Chris and I were going to be playing on different sides of the stage than usual. The lifts that we use to raise the lights in the air were broken from laying them down on the trailer. Our hero of the night Justin was on it to get them fixed. I was drenched in sweat even before we started. I figured there was going to be maybe 20 people come. There were 20 people but as we set up the crowd kept growing and growing into the hundreds. Word was spreading that Judd Hoos was going to play no matter what.

We finally got everything set up and and ready. The lights went out before we started the first song. This fireman’s hall had turned into a concert venue. It was electrifying. You could feel the eagerness from the crowd and the anxious feelings of the band to just start playing. We started and it felt so good to be playing in front of all these people. We played a long set of some of our best songs. Bob and us had no time to write a set list but we were surprisingly going through songs very smoothly. Justin had got the lifts back in working condition and the lights went up behind us while we were playing. The rain was coming down hard outside and the crowd was elbow to elbow trying not to get wet. The humidity was ridiculous. I can’t remember the last time I sweat so much. I ended up taking off my shirt and wearing my cowboy hat. I remember hearing Andy say in the talkback during Superstition, “Is there really a half naked cowboy playing trumpet on stage right now!?” The originals went over fantastic and the crowd was even singing along at the end of one of them. We played very well. Despite a few hiccups. A very drunk lady through up right on Andy’s pedal board. Devin broke two strings on his acoustic at different times throughout the night. Andy’s guitar had tons of problems with humidity and finally just crapped out by the end of the night. And during Gold on the Ceiling while I was jumping around like a monkey and soloing a slipped on stage and fell on my wrist really hard. I played the rest of the set, but I ended up giving up my guitar to Andy for the encore because my wrist was hurting so bad. The crowd loved us. Chris Walker stepped up to the occasion and did a great job on lights. It turned out to be such a good night. We started load out and tear down. The crew was exhausted as well as the rest of the band. But we got everything loaded up in the trailer as fast as we could. It was finally time to thank the firemen for their help and head to Tarnov. Back at the house we had a mini little jam session in the kitchen before all going to separate rooms to sleep.

So like I said, Judd Hoos plays no matter what. We really stepped up and faced adversity this last weekend. I have a feeling it is not the last time we are going to battle crazy storms this sumer. But its part of the job and thanks to our amazing crew and help from fans and friends we will always make it work. Thank you to everyone in Ethan, SD for coming out and making it an awesome street dance. And then a HUGE thank you to all those who made Saturday night possible. It was another great Judd Hoos weekend for the books. The ride home was good and we made sure our dads in Judd Hoos felt the love for fathers day. We are getting ready to start recording our new songs this week. Finally the new Hoos sound will be put on some tracks and be able for all of you to hear when ever you want very soon. Stay tuned for more On the Road with Judd Hoos blogs!